Connecting to the hm server: 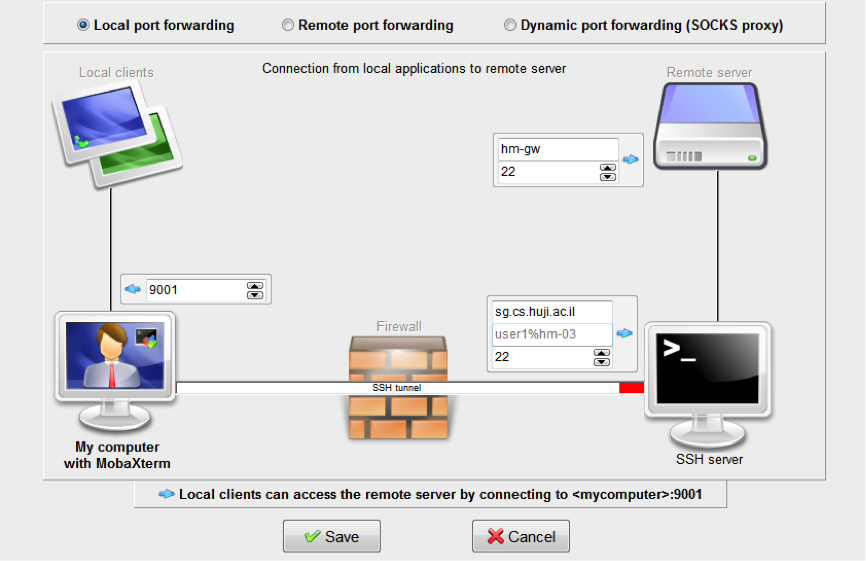 1 - start the tunnel by clicking on 'Tunneling' and press the

For an introduction to some basic linux commands, take a look at the https://wiki.cs.huji.ac.il/Intro_hm_cluster.pdf presentation.

Using slurm on the hm cluster:

The hm cluster currently has 44 nodes on which jobs can run. Slurm is a job scheduler that decides which node(s) a job will run on based on the job's requested resources (e.g. number of cpus, amount of memory, etc…), the availability of idle nodes, and the priority of the user which depends on how many jobs were run in the past.

Argument Default value Maximum value Description Notes -c, --cpus-per-task 2 32 number of cpus for job Maximum depends on CPU used in cluster, hm I-CORE cluster is 32. --mem 50MB ~64GB or ~128GB memory allocation for job Depends on memory of nodes, we have nodes with 64GB and 128GB of memory, you can't request all the memory since some is needed for the OS, if you want it all and don't care which node you can use: MaxMemPerNode. See below for more details. -t, --time 2 hours 31 days time limit for job Currently 31 days may be reverted to 21 days later. -N, --nodes 1 44 number of nodes to run job on Currently 44, may be increased in the future, either due to additional hardware purchases or reassigning of submit/test hosts to 'active duty' compute nodes.

Submitting a job to the slurm queue: